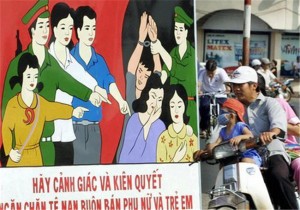 The recent case of 15 Vietnamese women trapped in a Moscow sex-trafficking ring underscores a larger problem of human trafficking involving thousands of Vietnamese in Russia, according to a rights group.

Many of the Vietnamese are held captive by their own compatriots who run several thousand sweatshops and brothels in and around the Russian capital, according to anti-trafficking advocacy group Coalition to Abolish Modern-day Slavery in Asia (CAMSA).

The U.S.-based CAMSA recently disclosed the plight of the 15 women who fell prey to a Vietnamese run sex trafficking ring in Russia which it charged had operated with the help of the Vietnamese embassy in Moscow.

After public exposure to the case prompted the brothel owner to let the women go in batches over the past month, the last of the 15 women returned home to Vietnam on Friday, CAMSA co-founder Nguyen Dinh Thang told RFA.

But the trafficker who brought them there and forced them into sex slavery remains at large, and Russian police have been “very slow” in responding to the case, he said.

CAMSA estimates Moscow has 3,000 Vietnamese-run sweatshops, each employing from a few to over a hundred workers, many of them victims of forced labor.

The city also has “numerous” brothels run by Vietnamese—serving mostly Vietnamese clients—where young women from the country are forced into prostitution after being lured to Russia with employment offers, Thang said.

He said he has personally worked on six cases involving some 300 Vietnamese victims of labor and sex trafficking trapped in Russia since last year.

“Vietnamese victims of human trafficking in Russia have practically no chance of finding freedom,” he said.

“The existing system in Russia makes it practically impossible for victims to escape and seek help.”

About half of the identified victims that CAMSA has tried to rescue over the past 18 months are still trapped by their traffickers.

Many of those who ran away from the sweatshops have been returned to their traffickers by Russian police, who have close links to traffickers, according to Thang.

“The syndicates that traffic them do so almost openly, counting on the complicity of the local police,” Thang said.

None of the cases that the group has brought to the attention of Russian authorities have been identified by the Russian government as human trafficking cases.

The Vietnamese government estimates that 30 percent of the 10,000 Vietnamese migrant workers in Russia traveled on an official labor export program and the rest made their own way on tourist visas, indicating some 7,000 are working there illegally.

But CAMSA estimates that figure is just the tip of the iceberg.

“We believe the actual number is many times higher,” Thang said.

On the U.S. State Department’s annual global report on human trafficking last year,  Russia was rated a  “Tier 2 Watch List” country – a designation for countries in danger of falling down to the Tier 3 blacklist of countries that do not comply with minimum standards for addressing human trafficking.

Vietnam was upgraded last year from a “Tier 2 Watch List” to “Tier 2” ranking.