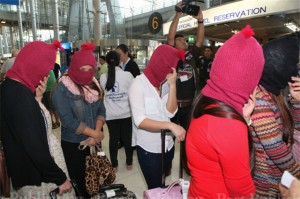 The government is doing too little to stop tens of thousands of trafficking victims being forced into “modern slavery” in the sex trade, fishing-related industries and domestic servitude in Thailand, the annual Trafficking in Persons (TIP) report by the US State Department has warned.

A file photo from December 2012 shows five Thai women returning home after being rescued from a brothel in Bahrain. A total of 21 Thais were recently rescued from forced prostitution in a coordinated effort by Bahraini authorities and the Thai embassy in Bahrain. But the US State Department has warned that Thailand is doing too little to prevent human trafficking into the sex trade, fishing-related industries and domestic servitude.

The US government report, which grades 188 countries and territories on their efforts to tackle trafficking, places Thailand on its Tier 2 watch list for a fourth consecutive year.

This means the Thai government is failing to comply with America’s minimum standards for eliminating trafficking and is yet to show sufficient evidence of increasing efforts to address the problem. The report describes Thailand as “a source, destination and transit country for men, women and children subjected to forced labour and sex trafficking”.

Thailand was granted a waiver from an automatic downgrade to Tier 3 this year, because the government has written a plan that could mean it soon meets the minimum standards for the elimination of trafficking, if implemented.

But the country will not be eligible for another waiver in 2014, so has just one year to make progress on the issue.

The TIP report argues that demand for sex tourism in Thailand fuels trafficking for commercial sexual exploitation, including the trafficking of children, warning that women and girls from the north of Thailand and migrants from neighbouring countries are particularly vulnerable to be lured into the sex trade.

It also criticises government for failing to provide specialist services for child sex trafficking victims, and for doing too little to protect the rights of those rescued from the trade, citing the case of a 12-year-old Karen girl who was enslaved in a Thai couple’s home for five years as an example of how the treatment of young victims is woefully inadequate.

“Police officials allowed media outlets to publish the girl’s name and take semi-nude photos of her while in police custody,” it says.

In terms of victims who are trafficked for forced labour, the TIP report says significant numbers are being exploited in commercial fishing, echoing previous reports of Southeast Asian men being trafficked onto Thai fishing boats, where they remain at sea for several years, unpaid and beaten into working 18 to 20 hours per day, seven days a week.

It meanwhile highlights serious flaws in the identification of victims of trafficking and with prosecutions of traffickers and says corruption remains “widespread among Thai law enforcement personnel, creating an enabling environment for human trafficking to prosper”.

The government reported investigating 305 trafficking cases in 2012, compared to 83 in 2011, but initiated prosecutions in only 27 cases during the year and obtained just 10 convictions.

“Allegations of trafficking-related corruption persisted during the year,” the report says. “There were credible reports that corrupt officials protected brothels, other commercial sex venues, and seafood and sweatshop facilities from raids and inspections, colluded with traffickers, used information from victim testimony to weaken cases, and engaged in commercial sex acts with child trafficking victims.”

In addition to what it describes as the “well known corruption of local-level police officers”, there is also evidence to suggest “protective relationships between central-level specialist police officers and the trafficking hotspot regions to which they were assigned”, it says, adding that “Thai police officers and immigration officials reportedly extorted money or sex from Burmese citizens detained in Thailand for immigration and sold Burmese migrants unable to pay labour brokers and sex traffickers”.

Luis C deBaca, the US ambassador responsible for combating human trafficking, said there are 44 countries on the Tier 2 watch list this year. But only six of those countries – Thailand, Afghanistan, Barbados, Chad, Malaysia and the Maldives – will be subject to an automatic downgrade next year unless they improve.

The ambassador said the US planned to work with the six countries to improve their ability to tackle human trafficking and achieve “results on the ground”.

This year, China, Russia and Uzbekistan were downgraded from the Tier 2 watch list to Tier 3, for failing to make greater efforts to combat human trafficking. But China rejected the report, calling it “arbitrary”.

“We believe that the US side should take an objective and impartial view of China’s efforts (in fighting human trafficking) and stop making unilateral or arbitrary judgements of China,” said foreign ministry spokeswoman Hua Chunying.

The US estimates that about 27 million people remain enslaved around the world.